Lithium-ion batteries require low-maintenance and they utilize intercalated lithium compounds as electrodes. As these batteries are relatively lighter than their counterparts, they are utilized in a vast array of products such as automobiles, mobile devices, pacemakers and personal computers. According to the global lithium-ion market report by IMARC Group, the market reached a value of US$ 34.1 Billion in 2020.

With the rising internet penetration and inflating income levels of consumers, the sales of portable electronic devices like mobiles and laptops are continually increasing which, in turn, is strengthening the growth of the lithium-ion battery market worldwide. Moreover, consumers nowadays are shifting from conventional automobiles to electric vehicles that use lithium-ion batteries to operate. This can be accredited to the growing awareness among users about reduced greenhouse gas emissions associated with the use of electric vehicles. Looking forward, the global lithium-ion battery market to exhibit strong growth during 2021-2026. 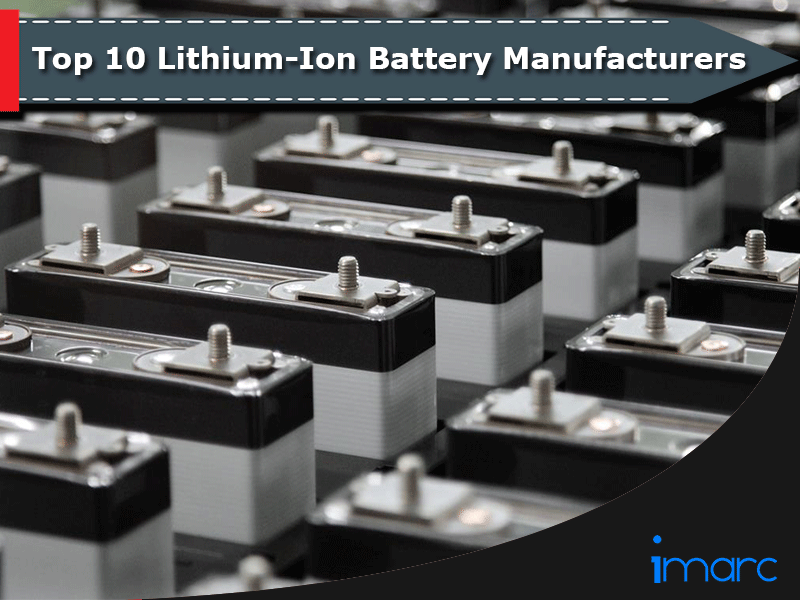 A123 Systems was founded in 2001 and it is headquartered in Livonia, Michigan with additional locations in Romulus, Michigan; Waltham and Hopkinton, Massachusetts; Leinfelden-Echterdingen, Germany; and Jiangsu and Hangzhou, China. It operates as a subsidiary of Wanxiang America Corporation. Moreover, the company develops, manufactures and supplies nanophosphate lithium iron phosphate batteries and energy storage systems across the world.

Automotive Energy Supply Corporation was founded in 2007 and it is based in Zama City, Japan. The company operates as a subsidiary of Nissan Motor Co. Ltd. and engages in research and development (R&D), manufacturing, and selling of lithium-ion batteries for automotive applications. Additionally, the company offers lithium-ion cells, modules, and packs for electric vehicle (EV) and hybrid electric vehicle (HEV) applications.

LG Chem was founded in 1947 and it is headquartered in Seoul, South Korea. It has a collaboration agreement with HitGen Ltd. and engages in basic materials and chemicals; energy solutions; IT and electronic materials, and advanced materials; and life sciences businesses across the globe. In addition to this, it provides engineering plastic compounds, thermoplastic elastomers, specialty compounds, and polycarbonate.

Panasonic Corporation was founded in 1918 and is headquartered in Kadoma, Japan. The company was formerly known as Matsushita Electric Industrial Co., Ltd. but it changed its name to Panasonic Corporation in 2008. The firm, in confluence with its subsidiaries, produces, sells, and serves electrical and electronic products under the Panasonic brand name worldwide. It mainly operates through eco solutions, connected solutions, automotive and industrial systems, and other segments.

Toshiba Corporation was founded in 1875 and is headquartered in Tokyo, Japan. The company, together with its subsidiaries, manufactures and markets electronic and electrical products around the world. It operates through six segments which include energy systems and solutions, infrastructure systems and solutions, retail and printing solutions, storage and electronic devices solutions, industrial ICT solutions, and others. Moreover, the company offers infrastructure systems including power, transmission and distribution, industrial, railway transportation, security and automation, broadcasting and network, photovoltaic, water and environmental, building, and POS systems; airport facilities and solid-state weather radars; elevators and escalators; and printing and IT solutions.

Amperex Technology Limited (ATL) was founded in 1999 and is based in Tsuen Wan, Hong Kong. The company owns manufacturing facilities in Guangdong Province and Fujian Province, China. It operates as a subsidiary of TDK Corporation to design, manufacture, sell, and market rechargeable lithium-ion/polymer battery cells, and related battery chargers and packs and systems for companies worldwide. Moreover, it offers prismatic, cylindrical, and polymer cells that are used in consumer electronics products such as laptop computers, smart/cellular phones, digital media players, digital cameras and camcorders, and cordless tools.

Founded in 2001, BAK Group was headquartered in Longgang District, Shenzhen, Guangdong. It has now developed into a new energy enterprise with lithium battery, electric vehicle and battery recycle as its core three business lines. BAK owns upstream and downstream industry clusters in China that integrate research and development (R&D), production and sales of lithium batteries and electric vehicles, such as Shenzhen BAK Power, Zhengzhou BAK Battery. Besides this, the company has subsidiaries in Europe and India, and has set up offices in the United States to support extensive domestic market.

Blue Energy Co., Ltd. was founded in 2009 and it is based in Fukuchiyama, Japan. It operates as a subsidiary of GS Yuasa Corporation and manufactures as well as sells lithium-ion batteries. Moreover, it offers EH4 cells and civic hybrid carried EH4 battery systems.

Founded in February 1995, BYD has grown from a start-up with only 20 employees into a global company with 240 thousand employees. The company has established over 30 industrial parks across six continents and has played a pivotal role in industries including electronics, automobiles, new energy and rail transit. From energy generation and storage to its applications, BYD offers zero-emission energy solutions.