Salmon is a species of ray-finned fish that belongs to the Salmonidae family and is generally found in the northern Atlantic and Pacific oceans. It currently represents one of the most traded seafood species as it is rich in zinc, protein, calcium, iodine, vitamin D, vitamin B3, cholesterol and omega-3 but low in saturated fats. Owing to the presence of these nutrients, it forms a primary ingredient of various food items including pasta, salads, burgers and tartar sauce. As per the global salmon (farmed and wild) market report by IMARC Group, the market reached a volume of 3.7 Million Tons in 2018.

Salmon offers several health benefits such as helping in weight management, relieving eye fatigue, reducing blood pressure, lowering the risk of developing cardiovascular diseases, improving bone and brain health, and enhancing overall health. Consequently, there has been a significant rise in the demand for salmon, particularly among health-conscious consumers. Further, various companies are introducing smoked salmon as well as salmon spreads, oils, and lox to expand their consumer base. Looking forward, the global salmon market size is anticipated to reach 4.7 Million Tons by 2024, growing at a CAGR of 3.9% during 2019-2024. 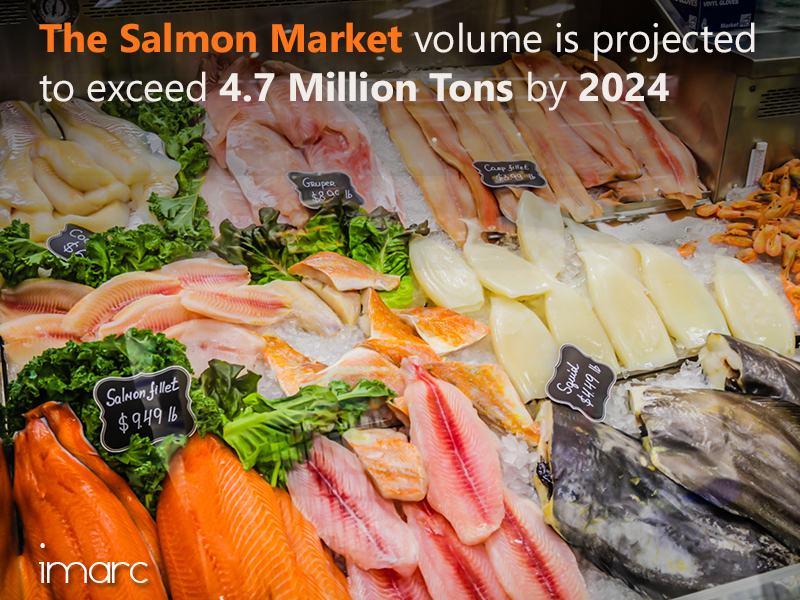 The market has been bifurcated into farmed and wild salmon. Currently, farmed salmon represents the most preferred variant, owing to the significant rise in aquaculture around the world. Chile, Norway, Scotland and Canada are the largest producers of farmed salmon, wherein farming is carried out using large nets in sheltered waters including fjords, net cage or bays. On the other hand, wild salmon fishing comprises going out with a single vessel and employing different kinds of nets and line fishing techniques. Traditionally, the harvesting of wild captured salmon is carried out over a short period and in limited areas where the salmon is easily accessible.

Norway and the United States Represent the Leading Producers

On the basis of the global salmon production, it has been found that Norway represents the leading producer of farmed salmon, followed by Chile, Scotland, Canada and the Faroe Islands. Presently, Norway has nearly 101,000 kilometers of mainland and island coastline. Moreover, the suitable temperature, well-developed infrastructure, and a supportive regulatory environment provide the country with a significant advantage in terms of efficient salmon production. Conversely, the United States is the leading market for wild capture salmon, followed by Russia, China, Brazil and Japan.

Based on the species, the market has been divided into Atlantic, pink, chum/dog, Coho, sockeye and others. Amongst these, Atlantic salmon exhibits a clear dominance in the market as it is rich in nutrients including proteins, vitamins and omega-3 fatty acids. Among the farmed and wild categories, wild Atlantic salmon is generally produced at low levels and its commercial harvest is relatively less. On the other hand, farmed Atlantic salmon is readily available all year round in fresh as well as frozen forms.

Frozen Salmon Accounts for the Majority of the Market Share

On the basis of the end product, the market has been classified into frozen, fresh, canned and others. Salmon harvested is generally frozen as the process aids in halting bacterial growth and enhancing its shelf-life. However, it does not impact nutrients such as proteins, essential minerals, and vitamins A and D. Generally, the freezing of salmon is done just after the harvesting to lock the freshness of the product.

Market Segmentation: Based on Distribution Channel and Region

About IMARC Group: IMARC Group is a leading market research and consulting company that offers management strategy and market research worldwide. The company has done multiple projects on the salmon industry, which has enabled clients to set up and expand their businesses successfully. Some of the company’s offerings include: