Salmon is the common name for the Salmoniformes fish which represents one of the most traded seafood species. It contains low saturated fats and carbohydrates, and high range of micronutrients including omega-3 fatty acids. Due to the presence of these nutrients, it forms an integral part of various food items such as burgers, salads, tartar sauce and pasta. Moreover, salmon is also utilized for grilling, smoking, pickling, broiling, poaching and roasting. According to IMARC Group, the global salmon market has reached a volume of 3.7 Million Tons in 2018.

Salmon has high nutritional content and offers numerous health benefits such as decreasing the risk of obesity, diabetes and heart diseases, lowering the level of triglycerides and reducing blood clotting. Owing to these advantages, there has been a significant rise in the demand for salmon, especially among health-conscious consumers. Further, several organizations are introducing smoked and jerky salmon as well as salmon spreads, oils, and lox to expand their product lines. This is expected to provide a positive impact on the industry in the coming years. Moreover, the environmental impact of farmed salmon is low as compared to traditional meat production. On account of these factors, the global salmon market size is expected to grow at a CAGR of nearly 3.8% during 2019-2024, reaching a value of US$ 4.7 Million Tons by 2024.

Farmed salmon is preferred by the majority of the consumers

The market has been segregated based on the type into farmed and wild salmon. Currently, farmed salmon represents the largest segment. Norway, Chile, Scotland and Canada are the largest producers of farmed salmon where farming takes place in large nets in sheltered waters such as fjords, net cage or bays. Among all the species, almost all the commercially available Atlantic salmon is farmed. On the other hand, wild salmon fishing involves the use of different kinds of nets and line fishing techniques to capture the fish.

Norway and the United States Represent the Leading Producer of Farmed and Wild-Caught Salmon, Respectively

On assessing the production scenario, it has been found that Norway is the largest producer of farmed salmon followed by Chile, Scotland, Canada and the Faroe Islands. Norway has nearly 101,000 kilometers of mainland and island coastline. The suitable temperatures, well-developed infrastructure, and a supportive regulatory environment give Norway a significant advantage in terms of efficient salmon production. On the other hand, for wild capture salmon, the United States is the leading producer, followed by Russia, China, Brazil and Japan. The US primarily exports frozen Pacific salmon. However, some of the other salmon species produced in the state include sockeye, chum, coho and Chinook. 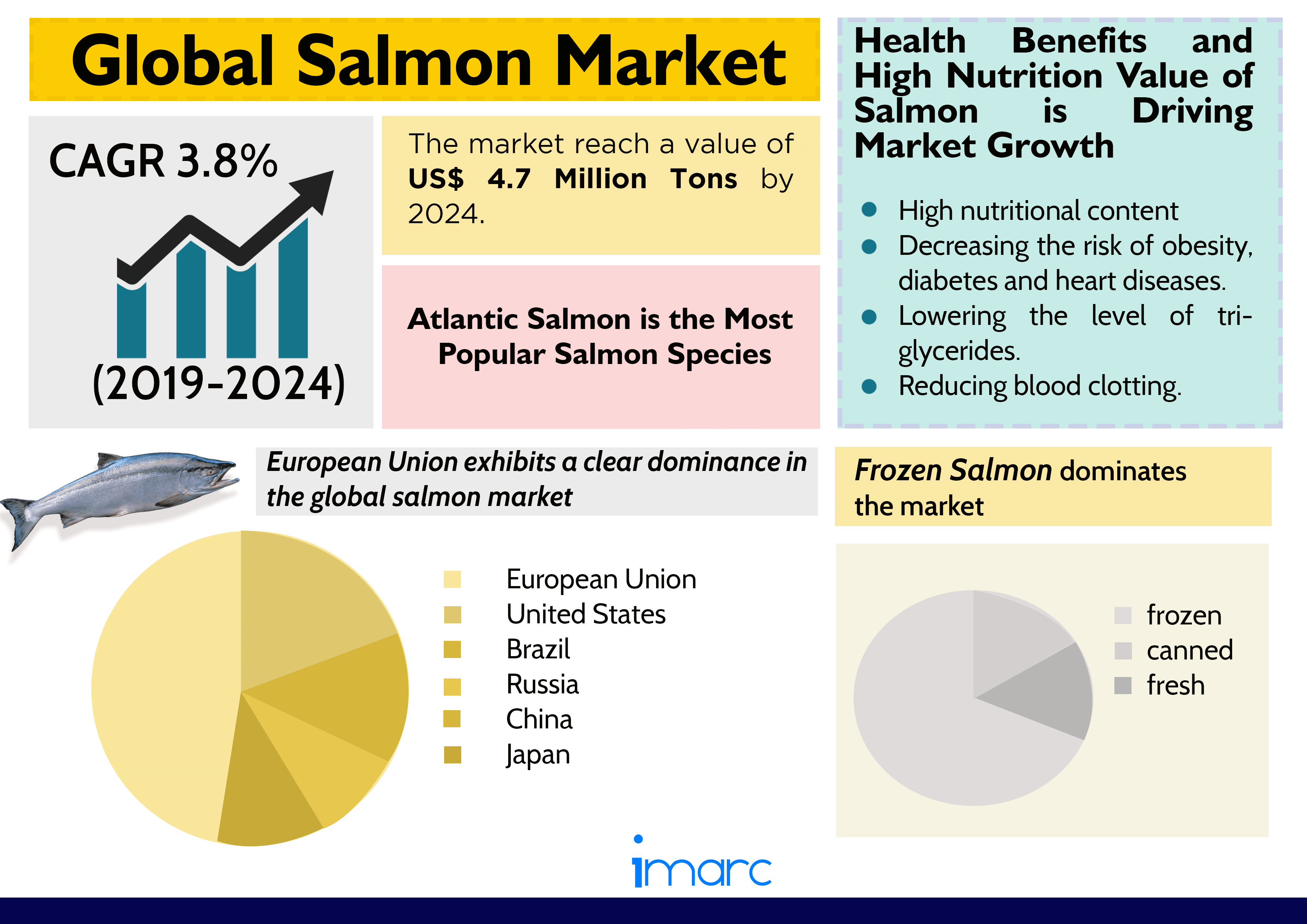 Atlantic Salmon is the Most Popular Salmon Species

According to the research analysis, Atlantic salmon represent one of the major species. They are a rich source of nutrients such as proteins, vitamins and omega-3 fatty acids owing to which the demand for Atlantic salmon is continuously rising among consumers. It is followed by pink salmon, chum/dog salmon, sockeye salmon, coho salmon and others.

Salmon is generally frozen which helps to increase their shelf-life by halting the bacterial growth. Currently, most of the salmon produced by different countries such as Norway, Chile, Scotland, Canada and the Faroe Islands, are exported in the frozen form so that the nutritional value can be preserved until it reaches the consumer. Besides this, the emergence of new recipes based on canned salmon is another trend in the market, which is driving the demand for canned salmon. Apart from this, fresh salmon majorly encompasses wild-caught fishes. After they are caught, the fresh salmon do not undergo the freezing process; instead, they are just kept at a low temperature to maintain their freshness.

Get a PDF Sample for more detailed market insights: https://www.imarcgroup.com/salmon-market/requestsample

Salmon is majorly distributed through the foodservice sector. The major salmon buyers in this sector include hotels, restaurants and fast-food chains. This segment obtains salmon from large-scale importers which then is used to prepare a wide variety of dishes. On the other hand, the retail sector includes supermarkets, hypermarkets, specialized retailers and traditional retailers. Most of the salmon is sold through supermarkets and hypermarkets.

Currently, the European Union exhibits a clear dominance in the global salmon market as salmon products form a traditional part of many European cuisines. Other major end-markets are the United States, Brazil, Russia, China and Japan.

The competitive landscape of the global salmon industry has been examined in the report. At present, Marine Harvest holds the largest share of the total salmon market. It is followed by Cermaq, Leroy Seafood and SalMar.

About IMARC Group: IMARC Group is a leading market research and consulting company that offers management strategy and market research worldwide. The company has done multiple projects on the salmon industry, which has enabled the clients to set up and expand their businesses successfully. Some of the company’s offerings include: