Top Beer Companies in the World

The global beer market reached a value of US$ 623.2 Billion in 2020. Looking forward, IMARC Group expects the market to exhibit stable growth during (2021-2026). Beer is an alcoholic beverage made from yeast, hops and malted cereal grains. As per the analysis by IMARC Group, the leading brewery companies are nowadays introducing new beer variants to expand their consumer base. These innovations are directed towards new flavors, types, production styles, and varying alcoholic content. The brewers are also using high-quality ingredients and special brewing techniques to produce superior products. 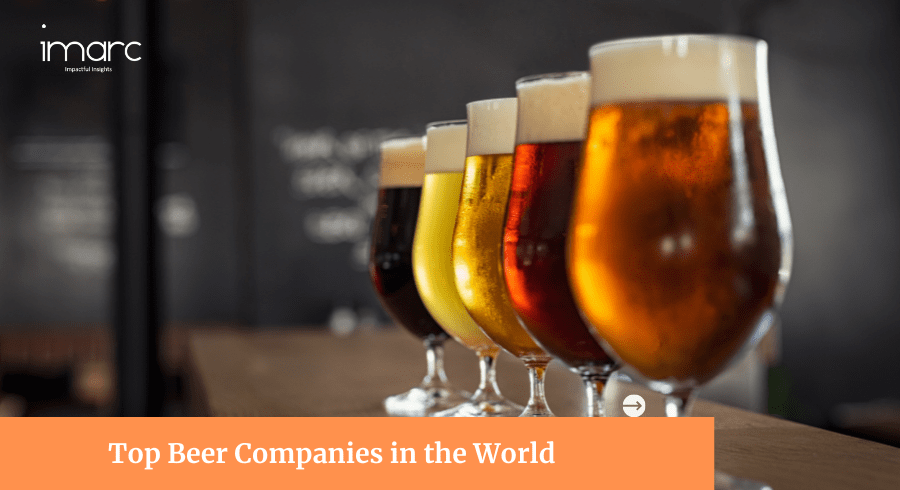 IMARC Group offers a list of the top 13 largest beer companies and beer brands in the World 2021. They are as follows:

Dogfish Head Brewery is a brewing company founded by Sam Calagione. It produces 262,000 barrels of beer annually. The company has been a rapidly growing brewery – it grew nearly 400% between 2003 and 2006. The first successful beer that Dogfish Head produced was Midas Touch, which was brewed with honey, white Muscat grapes, and saffron. Although it started by only selling beer in the state of Delaware, it became one of the most profitable microbreweries in the United States. Dogfish Head's best-selling product is its line of India Pale Ales (IPAs), which are offered in seven varieties. On May 9, 2019, the company was acquired by Boston Beer Company in a deal worth US$ 300 Million.

Heineken N.V. is a subsidiary of Heineken Holding N.V., which engages in brewing and selling beer and cider. The company operates in Africa, the Middle East & Eastern Europe; the Americas; Asia Pacific; and Other European countries. It offers beer, cider, soft drinks, and other beverages. It provides its beers under the Heineken, Amstel, Desperados, Sol, Tiger, Tecate, Red Stripe, Krušovice, Birra Morett, Affligem, Lagunitas, and Mort Subite brands, as well as under various other regional and local brands; and cider under the Strongbow Apple Ciders, Orchard Thieves, Stassen, Bulmers, Old Mout, and Blind Pig brands. It offers its products to retailers, bars, and restaurants through distributors.

Ken Grossman and Paul Camusi founded Sierra Nevada Brewing Co. They expanded their homebrewing hobby into a brewery in Chico, California. By 1987, the brewery was distributing to seven states and production had reached 12,000 US beer barrels (14,000 hl) per year, causing the company to pursue building a new brewery. In 1988, the brewery moved into a 100-barrel brewhouse, with four open fermenters, and eleven 200 US bbl (230 hl) secondary fermenters. A year later, Grossman and Camusi added the Sierra Nevada Taproom and Restaurant, which serves lunch and dinner and includes a gift shop. They currently offer more than 25 varieties of beer.

Grupo Modelo wears the Corona as the King of Beers. The brewer commands more than 60% of the Mexican beer market. It’s half dozen-plus domestic breweries produce and distribute 13 brands, including Corona Extra, the best-selling Mexican beer in the world, Modelo Especial, Pacifico, and Victoria. The group is present in almost 180 countries; however, the US is Modelo's largest export market. It imports Anheuser-Busch InBev's (AB InBev) suds in Mexico, as well as China's Tsingtao and Denmark's Carlsberg. Modelo also operates a chain of about 960 convenience stores under the Extra and Modeloramas banners. In 2012, Grupo Model was acquired by AB InBev in a deal worth US$ 20 Billion.

The "Fürstliche Brauhaus zu Oettingen" (Prince's brewhouse at Oettingen) was bought by the Kollmar family in 1956 and renamed "Oettinger Brauerei GmbH." Oettinger Brauerei is a brewery group in Gotha, Mönchengladbach and Braunschweig. It has been Germany's best-selling beer brand between 2004 and 2013, with an annual output of 6.21 Million hectolitres (5,290,000 US bbl) in 2011. Oettinger sells large amounts of beer for the lowest possible price. It also bought the brewery producing "5.0 Original" beer in Braunschweig, a competitor in the same market segment. The company is rarely found on tap in pubs and bars as most of it is sold bottled in supermarkets.

Kirin Holdings Company, Limited sells and manufactures alcoholic and non-alcoholic beverages, and pharmaceuticals and bio-chemicals in Japan and internationally. The company was formerly known as Kirin Brewery Company, Limited and changed its name to Kirin Holdings Company, Limited in July 2007. Its product portfolio includes beer, happo-shu, wine, whiskey, spirits, soft drinks, dairy products, fruit juices, and other products. It also produces and sells pharmaceutical products, biochemical products, and other products. In addition, the company engages in the livestock feed and theme park businesses; and management and operation of a chain of Kirin City beer pubs; manufacture and sale of amino acids and nucleic acids for pharmaceutical and industrial use bulk pharmaceuticals, as well as margarine, jams, and honey. Further, it is involved in the manufacture and sale of Coca-Cola products and other soft drinks, as well as sake; and manufacture and supply of Four Roses bourbon. Kirin Holdings Company, Limited has a strategic collaboration with Mitsui & Co., Ltd. and Onegevity Health for launching a testing system in Japan, as well as to develop nutritional products.